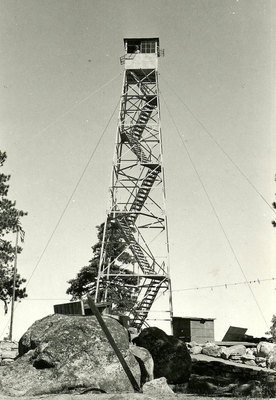 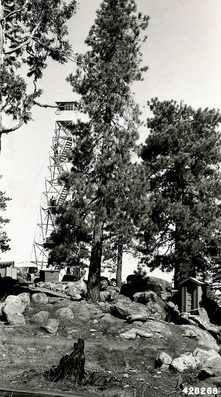 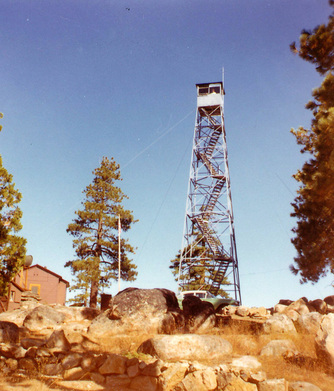 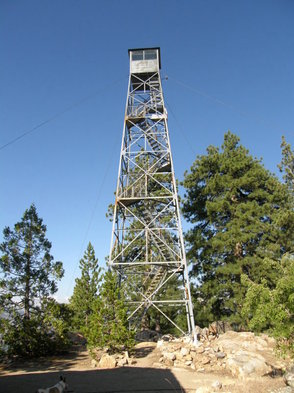 August 2009
Ron Kemnow photo
May 28, 1936:  "In Alder Creek Basin, improvements have been made to existing roads to eliminate steep grades and a new road is now under construction from Huot's Camp to Alder Creek Ridge, the site of a new primary Lookout."  (The Mountain Democrat)

July 9, 1936:  "A 'spike' camp at Huot, near Pacific House, will build a sixty-foot lookout tower, house and garage on Alder Hill on the south side of the American River."  (The Mountain Democrat)
September 12, 2000:  "A U.S. Forest Service employee jumped to his death from the top of a fire lookout near Sand Flat campground Tuesday afternoon, said Lt. Dennis Small of the El Dorado County Sheriff's Department.
James Welsh, 51, of Georgetown, jumped from the 80-foot Alder Ridge Lookout, located near here, despite attempts by sheriff's deputies to talk him out of it.
Coworkers became suspicious Tuesday morning when Welsh failed to report in at the beginning of his shift.  Two USFS officials later went to the lookout to check on him but found him despondent and threatening suicide, said Frank Mosbacher of the USFS.
Two hours passed as the coworkers tried to talk Welsh down.  They later notified the Sheriff's Department, and deputies arrived on scene.  The deputies tried to negotiate with him, but he did not respond, said Small.
Just after 4 p.m., Welsh apparently dove head-first onto the rocks below and was pronounced dead at the scene."  (Mountain Democrat)