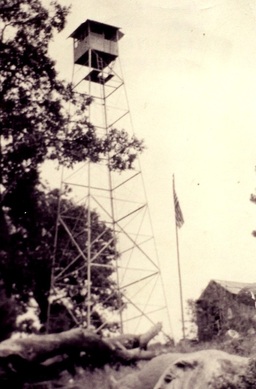 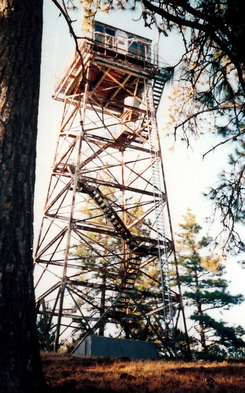 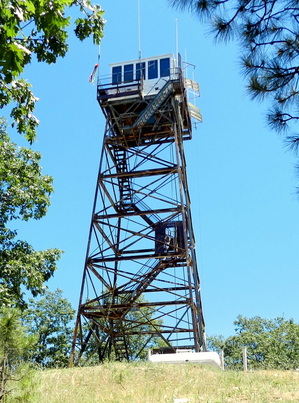 July 2011
Ron Kemnow photo
September 18, 1930:   "A two room house, for living quarters, has been built at the Delilah lookout station, north of Dunlap, Fresno county."   (Visalia Times-Delta)
October 19, 1930:   "Mr. and Mrs. J. A. Rudy have returned to their home here after a five month's stay at the Delilah lookout station."   (The Fresno Morning Republican)
August 2, 1941:  "Melvin Rose, park ranger attached to the Delilah Lookout eight miles north of the Grant Grove section of the Kings Canyon National Park, suffered serious cuts on his right arm at 3 o'clock yesterday afternoon when he slipped and fell in the lookout station, his arm plunging through a window.
Arteries in the arm were severed and Rose was in danger of bleeding to death, but his wife climbed a forty foot ladder to the tower and applied a tourniquet to check the flow of blood.
She then called for help and superintended the removal of her husband to Grant Grove, whence he was taken to a Fresno hospital by Dr. W.H. Riley, Civilian Conservation Corps physician, in a CCC ambulance."  (The Fresno Bee The Republican)
November 14, 1943: "Workmen started last Monday to rebuild 3 miles of the Delilah fire lookout telephone line destroyed in the Goat Corral fire of September.
The flames, so hot most of the trees to which the telephone line was attached were burned down, necessitating replacement with poles.  One hundred thirty one new poles and two miles of new wire will be required to complete the job.  The work is under the supervision of Frank Fowler, Hume Lake district improvement foreman."   (The Fresno Bee The Republican)
c.1959:  (The date is a guess)  A 65-foot steel Army surplus steel tower with a 15 x 15 foot flat roof cab was moved from a U.S. Army training camp to this site.
August 21, 1961: "State and Federal firefighters were hopeful the blaze, dubbed the White Deer fire, would be controlled Tuesday night. Some 1,000 firefighters were called in to battle the flames along with two helicopters and nine airplanes.
Sequoia National Forest officials reported the flames destroyed 500 acres of reproduction timber and 1,500 acres of mature timber. The only structure destroyed by the flames was a wooden storage building at Delilah lookout tower.
The lookout was evacuated Sunday by Mrs. Fern Billings after the fire erupted in two spots in White Deer Canyon north of state highway 180. She was replaced by Bob Sparks who was evacuated Monday when flames flashed by the tower." (Lodi News-Sentinel)
August 22, 1961:  "The fire flashed by the Delilah lookout tower which was evacuated twice since the blaze erupted.  A wooden storage building near the lookout was destroyed."  (Ukiah Daily Journal)