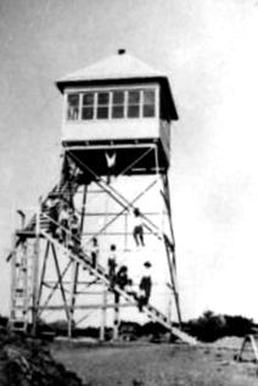 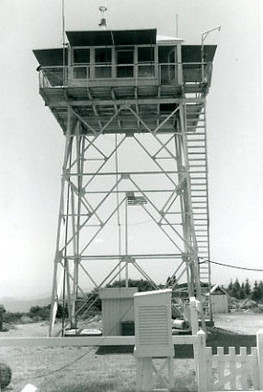 1963
Upper Lake Ranger District Collection
August 5, 1919:   "Frank Gobel decided the other day that he would smash a few automobile records and visit Ernest Phelps, who is the fire lookout at the Goat mountain forest observatory, at the same time.  An auto had never been near the top of the big mountain before.  Gobel kept 'er in the middle of the trail and fed gasoline to the machine till he reached the very top and sat in the car and talked to the lookout.  It was the first time an auto ever had scaled the trail to the pinnacle."   (Colusa Herald).
​March 19, 1920:   "E.C. Phelps reports that the heavy wind at Thanksgiving tore all the shutters from the Goat Mountain lookout house, blew out all the windows, carried away the steps leading up the tower to the house and even tore the lookout table inside the house loose from the platform to which it was fastened.  Last summer when No. 13 was given to this lookout point for the purpose of enabling the observers on airplane fire patrol to identify it, the wind blew out three windows and Kelpie's dog deserted him, and Phelps made dire predictions at that time if this number were allowed to remain there."  (California District News Letter)
June 24, 1932:   "Arlie C. Killebrew of Elk Creek has been named fire lookout at Goat Mountain to succeed James Lucas, resigned."   (Colusa Herald)
​June 14, 1943:  "Mrs. Virginia L. Shriver, 86, of Lakeport, is believed to be the oldest woman ever to take up summer living quarters atop one of the lonesome lookout stations in the Mendocino National Forest.  She accompanied her grandson, George Shriver, also of Lakeport, to Goat mountain lookout where Shriver will be on duty during the fire season."  (Redwood Journal)