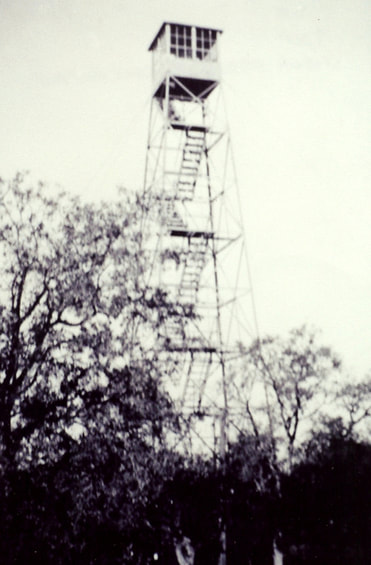 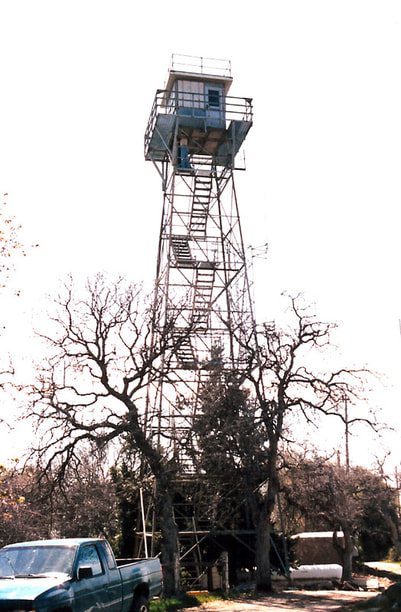 1999
Mark Swift Collection
April 2, 1923:  "A group of residents of the three fire districts, Sand Creek, Clark's Valley and Piedra, arrived in Fresno to appear before the board of supervisors this afternoon with a petition asking the board to establish a lookout station on Bear Mountain this summer.
George E. Smith of Orange Cove, chairman of the committee to appear before the board, said the plan to establish the station had met with approval of the Squaw Valley Farm Center and the Sanger, Reedly and Orange Cove Centers.
"It would afford greater protection for the three districts which are patrolled by Wardens, one for each of the districts," Smith said.
"Our plan is to have the board appoint only two wardens this year for patrol duty, making the third man the lookout warden."
Smith said the farm centers had figured out the cost of establishing the lookout station, telephone installation and other incidentals, and had concluded for the added protection it would afford from fires, that the station should be built.
Its location would be about two miles north of the Squaw Valley store, Smith said.  Those with Smith to appear before the board this afternoon are Oren Kincaid and O.M. Burk of Squaw Valley, Clyde and Ray Johnson of Piedra and W.P. Bullard of Dunlap."  (Fresno Bee)
April 27, 1923:  "Fresno County and the settlers in the vicinity of Squaw Valley and Dunlap have planned to establish a fire lookout station on Bear Mt.  It will cover considerable of the Trimmer and Dunlap country inside the Forest.  We will have direct telephone connection with the station.  The settlers are to build three miles of telephone line and a cabin on the mountain, and Fresno County is to pay the lookout.  We are cooperating to the extent of 3 miles of #12 telephone wire, fixing up their map, and will give their organization reports from out lookouts."  (California District News Letter)
May 28, 1923:  "Five volunteer crews worked yesterday and today on the Bear Mountain fire lookout station and telephone lines and by nightfall an added protection from fire was given to that wide territory that is visible from the mountain top.
While one crew worked away at the mountain tower, others were busy on the telephone lines as follows:  One at the Fildham ranch to  Dunlap and others between the ranch and Squaw Valley store.  There will be two telephone lines--one will connect the tower with the Squaw Valley store and the other by way of the Fuldham ranch, will run to Dunlap.
The plans for the lookout station were formulated by the Squaw Valley Farm Bureau Center, which with other organizations agreed to build the telephone lines and tower if the supervisors would employ a lookout.  For this position the board secured E.M. Hugh of Squaw Valley.
In addition to the lookout, there will be two fire patrolmen, Ray Bullard of Dunlap, who will also act as traffic officer on the Squaw Valley-Dunlap road, and C.E. Metcalf, who will patrol along the Sand Creek road.
The committee in charge of the volunteer workers is composed of George Smith, Jack Kincaid and William Bullard.
The board of supervisors has ordered a pair of high powered field glasses for the lookout and has provided a flag that will fly over the station."  (Fresno Bee)
May 1925:  "The county board of supervisors was unable to interest anyone in the $100 a month job as fire lookout on Bear Mountain."  From the Fresno Yesterdays column, 40 years ago published in the May 27, 1965 issue.  (The Fresno Bee The Republican)
​
July 23, 1925:   "The lookout station at Bear mountain was blown down, and Ranger and Mrs. Roy Rudy made their way to Squaw Valley, bringing news of fires."   (Plumas Independent)
March 18, 1927:  "Arrangements for construction of a 60-foot steel tower at the Bear Mountain fire lookout station on the north side of the road through Squaw Valley, thirty-five miles east of Fresno, have been completed, according to word received here today from M.B. Pratt, state forester.  After the tower has been completed the state will appoint a lookout.  Similar towers are contemplated for heavily wooded sections in other parts of the state under co-operative contracts with private or county interests, to aid fire fighters during the coming season."  (Fresno Bee)
October 28, 1927:  "Approval of the department of finance of an all-year co-operative forest fire agreement with Fresno county was announced by W.B. Rider, deputy state forester.  Under the agreement the state will maintain a ranger in Fresno county all year and also will maintain a lookout on Bear Mountain during the summer."  (Bakersfield Californian)

October 29, 1964:   "Lightning struck the Bear Mountain lookout of the state division of forestry, knocking out telephone lines and the station's radio transmitter."  (The Fresno Bee The Republican)