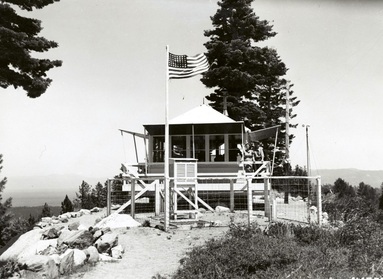 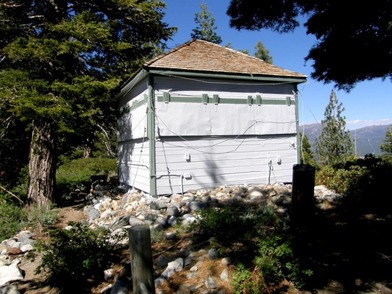 June 2010
Ron Kemnow photo
The older of two structures on the site. 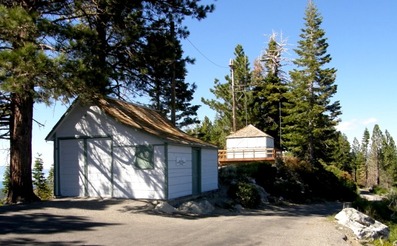 June 2010
Ron Kemnow photo
The garage with the newer of the two lookout buildings behind.
April 9, 1921:   "A report comes from Mills Waterhouse of Angora Lookout who is stationed at the Pacific Ranger Station headquarters this winter to the effect that the new trap that Ranger Morris set in his station has proven more than successful as Waterhouse made a trip over his trap line and found that this trap had caught a stray hobo.  Ranger Morris is to be complimented upon his choice of bait.  E.F.S. - Eldorado --"  (California District News Letter)
December 12, 1924:  "At the most important fire lookout station in Lake Valley, Angora Lookout above Fallen Leaf Lake, 75 guests registered one day in July.
These people come from all parts of the United States and practically all of them were given fire prevention literature, route maps and other publicity matter."  (Mountain Democrat)
August 20, 1925:  "Lookout Waterhouse located on Angora Lookout in Lake Valley reports a registration of 606 persons at his lookout for the month of July.  He states that about 15 percent of the visitors did not register, and that the largest previous registration for a month at this point was 488.  Who said the life of a Forest lookout was lonely?"  (California District News Letter)
August 28, 1931:  "Clisby Loomis, forest service lookout at Angora, and a trail crew extinguished a forest fire in Desolation Valley this week."  (The Mountain Democrat)
August 27, 1936:  "Hardly believable is the report of the number of visitors during the month of July at Angora Fire Lookout, on Eldorado Forest.
Situated on the moraine in Lake Valley District, which separates Fallen Leaf Lake from Lake Valley, the lookout is well off the beaten path and the figures given indicate the Mr. and Mrs. John Public are prepared to leave beaten paths in their search for scenic beauty.
The report shows that during the month 900 persons registered at the lookout.  There were 1,225 automobiles passed the lookout and these carried 3,405 persons.  Three hundred four saddle horses also passed the lookout during the month.
The road to the lookout, from Meyers, takes off the main highway about a mile north of Meyers and passes Celio's sawmill.  It is well signed.  Beyond the lookout is a parking area from which visitors may hike three-quarters of a mile to Angora Lakes, a scenic beauty spot which many find well worth the trip."  (The Mountain Democrat)
September 17, 1936:  "The report on travel past Angora Lookout, on the moraine overlooking Fallen Leaf Lake in the Lake Valley District on the Eldorado Forest, shows 3,500 visitors in 1,224 automobiles.  In addition, there were 238 horses passed the station.  The report, filed by Ranger Raliegh Bryan, shows that 680 of the visitors registered at the lookout station."  (The Mountain Democrat)
August 12, 1965:  "Severe lightning storms --- a total of 15 fires surrounding Lake Tahoe during the last 24 hours, a check of U.S. Forest Service installations revealed late Wednesday.
In addition to the fires, the lightning scored "two direct hits" on the Angora Lookout tower above Tahoe's west shore.  But no one was injured, nor was the steel tower damaged."  (Nevada State Journal)