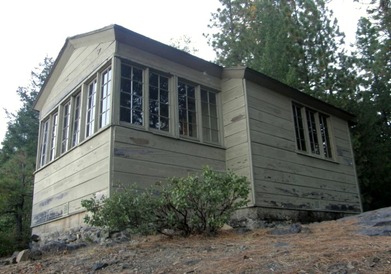 1933:  The lookout was constructed.
July 29, 1943:  "Thursday morning Mr. and Mrs. B.M. Bucknell took their posts at the Pine Mountain forestry lookout for the summer months, replacing Ralph Johnson, who was recently injured and unable to carry on the work at Pine Mountain."  (Redwood Journal)
August 7, 1944:  "Earl Mersinger, who was hurt about two weeks ago on Pine mountain while fire fighting, will be in Howard Memorial Hospital, Willits, for some time due to a foot injury.  He has been there under the care of Dr. R.A. Babcock the past week.  Mr. Mersinger is forestry lookout at Pine Mountain, near Upper Lake."  (Redwood Journal)
August 9, 1944:  "The Mersingers have been stationed on the Pine Hill Lookout in Lake county, but after Mr. Mersinger's injury the position was taken by Mrs. Carl Capell.  June Marie Bauer is also at the lookout, assisting her aunt."  (Ukiah Republican Press)
2002:   The lookout became a part of the recreational rental program after being restored by volunteers.