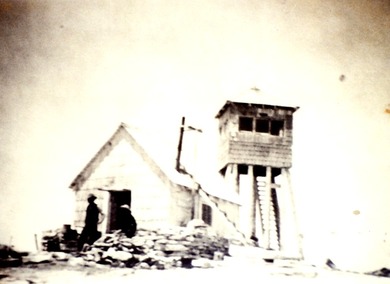 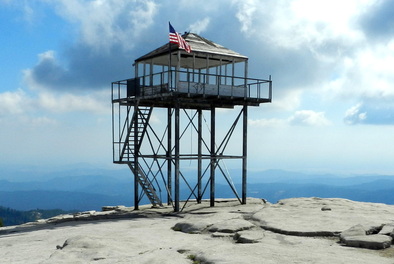 July 16, 2011
Ron Kemnow photo
August 31, 1912:  "A fire report which reads like a detective story has just been received at the San Francisco office of the Forest Service.
At five o'clock on the morning of July 26, the lookout stationed on Bald Mountain, on the Sierra National Forest, sighted a fire on the south slope of Kaiser Crest.  The District Ranger was immediately notified by telephone, and with a fireguard started for the fire at once.  With much difficulty it was put out.  Investigation showed that it had started from a camp fire.  On a quaking asp nearby were carved the names of W.B. and N.P. Gillespie and J.S. Pisor, all of Fowler, with the date July 25.  The Forest Ranger immediately took their tracks and followed them into the valley.  They were located in Fresno where on July 29 in Judge Graham's court they pleaded guilty to a violation of the State Fire Law and were each fined $25, which upon their pleading poverty was reduced to a total of $30." (Mountain Democrat - Placerville)
September 7, 1913:   "On the south side of the river there is a lookout on Baldy, near Shaver."  (The Fresno Morning Republican)

September 25, 1921:  "The man who sits up aloft in a forest lookout tower, watching for the first sign of a fire, seems to an outsider to have a very soft job.  "Nothing to do but look around."  True, aside from doing his own housekeeping, answering questions of an occasional stray tourist, writing out his reports, but the strain on a man's patience and his powers of concentration is enormous, as monotonous day after day passes.
T.E. Parker, who has for many years been the lookout on Bald Mountain, near Shaver, had that monotony broken into inch bits, however, by the storm of the first week in September.  Fortunately it came in the night, and found him in his cabin, not in the lookout tower.  He was sitting on his bed, between the two windows, watching the storm when the lightning struck, wrecking the tower, destroying the telephone instrument, absolutely consuming about 200 yards of wire.  It also struck the cabin, smashing out both windows and knocking Mr. Parker senseless.
When he recovered consciousness, the lookout man found several small and absurd effects of the storm, beside the dismantled tower and the rain swept cabin:  The works of his watch that had been hanging on the bedside were fused, and his cake turner and can-opener that had been hanging on the wall near one of the windows, had lost their wooden handles which the electricity had split from the metal.
Mr. Parker has now located a cave near the top of that bald peak, and purposes, at any time an electrical storm approaches, to retire to the cave without ceremony."  (Fresno Bee)
​August 25, 1922:  "Resigns Lookout Position   Last summer the Baldy Lookout tower and house were struck by lightning -- a rather severe experience for any man, although Mr. Parker, the lookoutman, was not seriously injured.  This year he went up as usual on the first of June, but two months has brought him to the end of his string, nervously.  The dread of another electrical storm has conquered, and he has reluctantly decided to resign as soon as a substitute has been found.  Parker has been Lookout on Baldy for ten seasons, is thoroughly familiar with all the region visible from that point, and has given mighty good service.  We are sorry to lose him, and still sorrier that his condition came about through Government service.  It is of the same type as shell shock in military service, and he should as surely have the gratitude and appreciation  of this country.  --Sierra--"  (California District News Letter)
January 25, 1924:  "On January 4 T.E. Parker died from heart failure.  Mr. Parker served for ten years on the Sierra Forest as lookout on Bald Mountain,
In 1921 he received considerable publicity when his lookout tower and house were struck and partially destroyed by lightning.  Due to the nervous shock received at that time he was released as lookout in 1922 and was given compensation until he died at the age of 69 years.
He was unexceled as a lookout and the service deeply regrets his going."  (California District News Letter)
June 19, 1927:  "The real reason for a freak storm of June 7th which sent a sixty-mile gale hurtling through the San Joaquin Valley and chain lightning darting around the Sierra peaks has just been revealed.  It was only a little joke staged by the red gods of the wilderness on a fire insurance agent who had boldly climbed the granite dome of old Mount Baldy to sell a policy to the fire lookout on the mountain.
The weather man will talk about barometric pressures and the amateur astronomer will mention the big spot on the sun as reasons for the great storm.  But those who rule over the destinies of the mountain and forest know that life there is somber and tragic, and must be lightened with a little humor.
So while L.T. Ward of Fresno, the aforesaid agent, sat in the signal tower on this great mountain which towers 7,834 feet into the air above the surrounding territory and O.W. Barnhart, the lookout, listened with interest to the opening paragraphs of an insurance-selling talk-the elements entered the game.
Great banks of clouds wheeled into line like dim squares of infantry.  The green of forest and meadow below Baldy was hidden under a sea of pearly white.  Wind howled down from the higher peaks.  It thundered on the left, and chain lightning broke jaggedly across the cloud ocean below Baldy.
The Insurance agent forgot the second paragraph of his selling talk and looked at the calm-faced lookout.  The telephone began to jangle wildly.  The agent watched the forest service man disconnect it.
"Just for safety reasons," he explained.  "As a matter of fact, there isn't enough dirt up here to ground it, so our ground wire is a mile and a half long and drops down to the meadow below."
The man from the valley remembered then that Mount Baldy, a solid granite peak, just seventy miles northeast of Fresno, is a favorite target for lightning.  He mentioned this to the lookout.
"Yes," said the latter, "six years ago a ranger up here was knocked out in a storm.  He was a fellow that wore glasses."
"Did he get hurt?" An Insurance man must get lots of data on prospects.
"Not much.  Face bothered him some afterwords.  You see, the lightning melted the rims of his spectacles to his cheeks."
"Oh," said the Insurance agent, and took another look at the playing lightning."  (Fresno Bee)
1936:  A 18-foot, 6-inch tall H-brace steel tower with a 14 x 14 cab was constructed by members of the Civilian Conservation Corps.