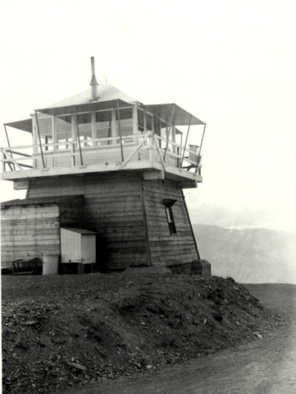 No date
USFS, Siskiyou County Museum Collection
By permission only 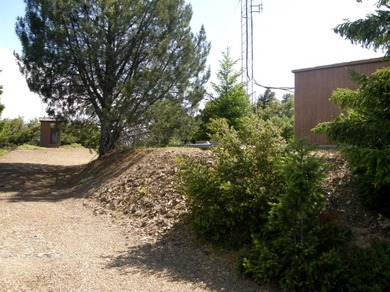 July 2009
Ron Kemnow photo
July 15, 1935:  "(Wilder Diary)  Hooligan (Dr. Wilbur's packer) moves Percy (Starritt) to the new Shelton Butte Lookout."  (Chronological History of the Klamath National Forest, Vol. IV, 1931 - 1940)
1942:  The Shelton Butte Lookout Station was used by the Aircraft Warning Service during the winter of 1942-1943.
August 4, 1945:   "R.F. Lamberger, the new lookout on Shelton Butte, replaced Edgar Warrington as lookout on July 25."   (Blue Lake Advocate)
September 11, 1952:   "Mrs. Ena Starritt is now at Shelton Butte lookout working for the Six Rivers Forest as relief lookout."   (Blue Lake Advocate)
June 6, 1955:  "District Ranger Scollay Parker reports that radio technician Charles Ball of the Six Rivers National forest and Don Marriott, fire crew foreman of Orleans, have installed and checked radio equipment at the Shelton Butte fire lookout in advance of fire season.  The lookout covers the area of Bluff creek drainage and along parts of the Klamath river.  Many tourists come to the Orleans country to camp and go to the lookout for the fine view which may be had from it."  (Humboldt Standard)
June 19, 1958:   "Mr. and Mrs. Herbert Sonneborn and two children have moved to the Shelton Butte lookout where they will spend the fire season working for Six Rivers Forest."   (Blue Lake Advocate)
June 11, 1959:   "Julius B. Starr, a newcomer on the Orleans District of Six Rivers, will be the Shelton Butte Lookout.  Starr retired July 31, 1958 after serving twenty years with the U.S. Marine corps.  He is married and has three children."   (Blue Lake Advocate)
August 24, 1962:  "C.W. Taggart, a night watchman at the Humboldt Fir mill in Hoopa, died in a 700-foot plunge down the 3,000-foot embankment south of Orleans.  His body was thrown out at that point, and the car continued down the chasm.
Taggart was traveling to visit his wife Lillian, a fire lookout on Shelton Butte.
Highway patrolmen presumed that he was blinded by sunlight and lost control of his passenger vehicle.
Officers descended 1,500 feet into the canyon looking for the car but gave up when the terrain became too rough."  (Eureka Humboldt Standard)
July 8, 1965:   "A temporary tower structure is being erected at the Shelton Butte Lookout by Forest Service carpenters Gene Taylor and Charles Nichols.
The Lookout is manned by Robert Tillitz of Chico."   (Blue Lake Advocate)
DESIGNATION - SHELTON BUTTE LOOKOUT HOUSE
PID - MX1222
STATE/COUNTY- CA/HUMBOLDT
COUNTRY - US
USGS QUAD - WEITCHPEC (1979)

DESCRIBED BY COAST AND GEODETIC SURVEY 1941 (DHK)
STATION IS ON THE E SIDE OF THE KLAMATH RIVER, ABOUT 6 MILES
NNE OF WEITCHPEC AND ON THE HIGHEST PART OF SHELTON BUTTE.
IT IS ABOUT 1 MILE E OF THE KLAMATH RIVER, IS A COMPARATIVELY
LOW, CONE-SHAPED HILL. THE LOOKOUT IS ABOUT 25 FEET HIGH,
IS PAINTED WHITE AND HAS A PYRAMIDAL-SHAPED ROOF. THE HIGHEST
PART OF THE ROOF WAS INTERSECTED.