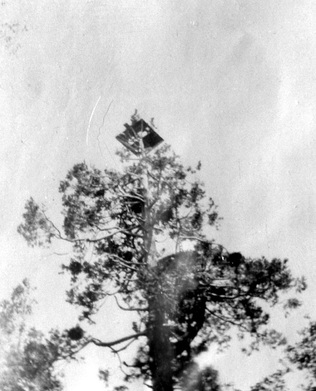 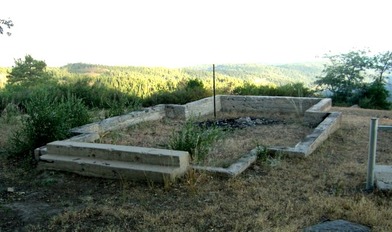 August 2009
Ron Kemnow photo
Foundation of living quarters / observation room.
June 18, 1913:   "The forest service is constructing six miles of telephone line from the Iron mountain lookout station to Herman Bryant's cattle camp on the Silver lake and Sly park road.  This will complete the system for the El Dorado national forest in the Plum creek country."   (Sacramento Union)
August 1, 1914:  "A merry party of young ladies, under the care of Mrs. W.H. Albright, returned from the Darrington homestead in the mountains Wednesday night.  They were:  Fern Combellack, Marcella Sigwart, Etta Willett, Edna Maynard, Ethel Frey, and Marybelle Albright, friends of Miss Grace Darlington.  The campers report having had a fine time, fishing, swimming, and playing croquet, crowning their trip by killing a rattlesnake with nine rattles and a button, and climbing Iron mountain.  Miss Frey ascended to the top of the Ranger's lookout, 75 feet above ground."  (Mountain Democrat)
February 12, 1916:  "The trip from Park will take two days so that the rangers will have to spend a night on the way at the Iron Mountain Lookout house.  Wood and supplies have been cached at the various camps which they will occupy.  After estimating the timber in the vicinity of Leek Spring they will make their camp at Bryant's and will cruise the timber in that neighborhood."  (Mountain Democrat)
September 30, 1935:  "We said Saturday that we were going to tell you about the life of a lookout in the national forests, so here goes...  Beating back over dusty, rutty and extremely crooked roads for more than 20 miles, we finally came to a point where the sign assured us that if we took another half mile run straight up, we would reach the Iron Mountain Lookout... Be it said to the credit of Rex Buckle's Chevrolet that we made the last half mile with ourselves and the missus more thirsty than the car... And here is our first impression...  The drinks that we got, clear, cold spring water, had been packed in by canvas bags on the backs of horses.
We felt like a little rest, and the forest ranger was glad for a chance to chat...  Did he feel lonesome... Not a bit... He didn't like the town anyway, and besides he had his wife and youngster up there with him... And then there was someone like ourselves who dropped in every day, and he had a radio for entertainment, except up there lightning played h--- with it... And really he was sorry that before long there would be a foot of snow, and with that a secondary lookout that would mean that he would have to pack up and move out... He would really like it if he could stay all winter and he is hoping that when the new Alder Ridge lookout, which is to be a primary lookout, is completed, he will be able to win the appointment to it and stay there year around.
Little do most of us think as we drive along the ribbons of concrete that are our main mountain highways, that far above us, on peaks that we cannot even see from the road, there are men, together with their wives and babies, who are watching our progress... And if we should happen to cast a cigarette into a spot where a fire results, these men are on the job and in a few moments time have a crew rushing to the scene... It is one of those things we accept as natural and in the day's affairs, but the romance and completeness of which we do not appreciate until we have seen and felt its innermost workings... And so concludes our saga... weak and ineffectual as it may be... of two weeks spent in the mountains with men who live in and know the mountains for the living things that they are."  "Hit and Miss - By 'Joe Beamis'"   (Woodland Daily Democrat)
July 15, 1937:  "The upper country was hit by a thunderstorm, Friday afternoon and Iron Mountain forest fire lookout, Joe Flynn, reported hail "as big as moth balls."'  (The Mountain Democrat)

July 15, 1937:  "Joe Flynn, lookout at Iron Mountain, was called into Placerville Tuesday night and when he returned to his post Wednesday morning he found that the house and an adjoining building had been destroyed by fire." (The Mountain Democrat)
August 24, 1961:  "Not only had (John) Hornbrook worked on the Leek Springs lookout that was featured last week, but in 1911, he recalls, he virtually built single-handed the lookout on Iron Mountain.  The structure was built in a cedar tree which still stands.  The platform was 60 feet off the ground, and the former lookout recalls that his prime duty was to stay within earshot of the phone unless authorized to leave his station to help fight a nearby fire."  (Mountain Democrat)
June 20, 1974:  "The old Iron Mountain Lookout buildings are for sale according to ranger Scollay Parker of the Eldorado national forest.  The one bedroom house and small garage slated for removal were built in 1934.  Anyone interested in these buildings should cal the Forest Service.
Through most of its life Iron Mountain Lookout was used by lookout firemen.  But this practice was stopped nearly 20 years ago on the Eldorado.  Since then the lookout has been used only sporadically and not at all in the last five years, so the the buildings are falling into disrepair.
The lookout firemen usually supplied their own horse and car and came prepared to spend a good part of the summer on the lookout before going into town for supplies.
As soon as the lookout fireman saw a smoke he would report it by phone and then head for the fire by himself either by car or horseback, whichever was appropriate."  (Mountain Democrat)